The Toshiba MSX (HX-10) 64K. By Tony Lyon; 2 Comments; The Toshiba MSX was first announced on the 27th of June 1983. It was then that the MSX standard was formally announced during a press-conference and when large Japanese firms declared their plans to introduce these machines. The HX-10D is the second MSX computer released by Toshiba and the first MSX computer that comes with 64kB RAM. It lacks a printer interface. Toshiba sold the HX-P500 interface cartridge to connect to a printer.

The Toshiba MSX was first announced on the 27th of June 1983. It was then that the MSX standard was formally announced during a press-conference and when large Japanese firms declared their plans to introduce these machines.

Inspired by the success of VHS as a standard for video cassette recorders the name MSX was to standardized home computer architecture in a similar way. This was conceived by Kazuhiko Nishi in the 1980s, then Vice-president at Microsoft Japan and Director at ASCII Corporation.

Despite Microsoft’s involvement, MSX-based machines were seldom seen in the United States and Britain (although heavily advertised by Toshiba in the UK). At the time, most people seemed to agree MSX meant ‘MicroSoft eXtended’, referring to the built-in “Microsoft eXtended BASIC” (MSX-BASIC)

Nishi’s standard consisted primarily of several off-the-shelf parts; the main CPU was a 3.58 MHz Zilog Z80, the graphics chip a Texas Instruments TMS9918 with 16 KB (KiB) of dedicated VRAM, the sound and partial I/O support was provided by the AY-3-8910 chip manufactured by General Instrument (GI), and an Intel 8255 Programmable Peripheral Interface chip was used for the parallel I/O such as the keyboard. 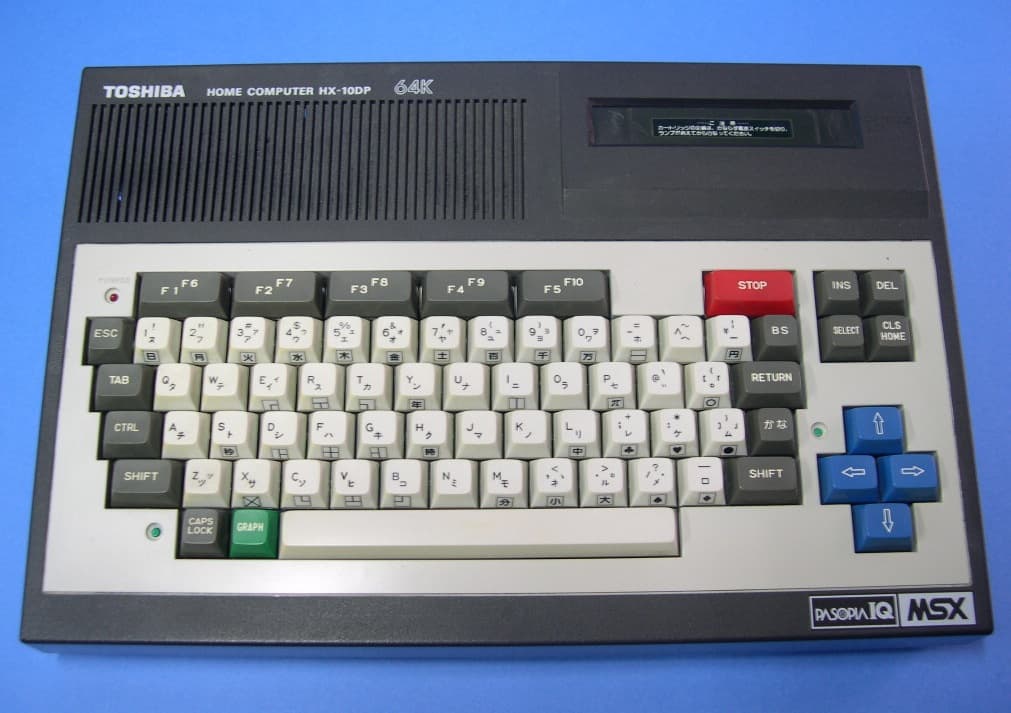 Before the appearance and great success of Nintendo’s Family Computer, MSX was the platform for which major Japanese game studios, such as Konami and Hudson Soft, produced their titles. To think that the ‘Metal Gear’ series was originally written for MSX hardware all those years back nearly twenty five years ago.

A problem for some game software developers was that the method by which MSX-1 computers addressed their video RAM (to draw a picture on the screen) could be quite slow compared to systems that gave direct access to the video memory. This, and the fact that the completely different features the MSX-1’s video chip (using the MSX Video access method) had to compensate for the slower video access were not efficiently used while porting (mostly Spectrum) software, made the MSX-1 to appear slower when running ported games.

Some minor compatibility issues also plagued ported Spectrum games. For example, the Toshiba HX-10 machine was unable to read certain key combinations at the same time, preventing the Spectrum “standard” of “Q, A, O, P used for directional functions during games”, whereas machines by other manufacturers worked fine. Later (ported) games tended to use the MSX-1 joystick port or used MSX’s official arrow keys and space bar, or offered the option to choose other keys with which to control the program, solving the problem.

Here’s Konami’s version of Mario Gradius on the MSX.

In total, 5 million MSX computers were sold, which made it relatively popular but not the global standard it was intended to be. For a comparison with rival 8-bit computers, the Commodore 64 sold 17 million units worldwide in its lifetime, the Apple II sold 6 million units, the Atari 8-bit sold at least 4 million units, the Amstrad CPC464 sold 3 million units, and the Tandy TRS-80 sold 250,000 units.

The Toshiba HX-10P, more commonly known simply as the HX-10 as indicated on the machine and on the box, is one of the adaptations of the Japanese Toshiba HX-10DP for the British market - see HX-10 series for the technical details

While it was clearly meant for the British market, as it has a 240V power supply, it was also offered in other markets in mainland Europe such as Germany and Italy. These were likely grey imports, as Toshiba had overestimated the amount of systems they could sell in Britain. As an effect the prices of the HX-10 in Britain quickly dropped, and Toshiba also tried offering a starter kit (see HX-10 Kit below) in Britain to shift inventory.

A demo tape was included (but not provided with the HX-10 Kit detailed below). The demo is completely written in MSX-BASIC and contains 5 programs: Sample - Demo - MSX Graphics - Keyboard Trainer - Junior Maths.

Official launch price for Great-Britain in late 1984: £279. However prices quickly dropped, and a year later the system sold for under £70.

In Great-Britain, in October of 1985, Toshiba introduced a complete kit as a starter pack for £139.99, which included the following:

Prices however continued to drop, and in February of 1986 it sold for under £100.