(The relative pronoun is bold. The adjective clause is highlighted.)

The Function of Relative Pronouns

(2) To tell us something interesting about it.
For example:

(The adjective clause (highlighted) tells us something interesting about Inspector Smith.)

In each of these examples, the relative pronoun is bold and the adjective clause is highlighted.

The following relative pronouns head adjective clauses that identify their nouns. (Note that there are no commas.)

The following relative pronouns head adjective clauses that give unnecessary but interesting information about their nouns. (Note that there are commas.)

Why Should I Care about Relative Pronouns?

Here are the six most frequently asked questions related to relative pronouns:

(Question 1) Do you put a comma before 'which'?

The answer is sometimes yes and sometimes no. This applies to all relative pronouns, not just 'which.' (Actually, it doesn't apply to 'that,' but we'll cover that point later.) Look at these two examples using 'who': These two sentences are nearly identical, but one has commas and one doesn't. They are both correct.
It all depends whether the adjective clause (the highlighted text) specifies its noun. If it does (like in the first example, where it specifies 'the man'), then don't use commas. If it doesn't (like in the second example, where it's just additional information about 'my neighbour'), then use commas. Now look at this example: This is also correct. This time the adjective clause is specifying 'my neighbour.' We're now talking about my lottery-winning neighbour as opposed to any neighbours who didn't win the lottery. So, you have to think carefully about whether an adjective clause specifies or doesn't.
Top Tip
Treat the commas like brackets. If you'd happily put brackets around the adjective clause, then use commas because the clause will just be additional information.
Another Top Tip
If you'd happily delete the clause, then it must be just additional information, meaning you should offset it with commas.
So, the question was about using a comma before 'which,' but the answer used examples with 'who.' There is a good reason for that. Lots of Americans, and increasingly Brits, insist on using 'that' instead of 'which' without a comma (i.e., when 'which' heads an adjective clause that specifies its noun). Look at these examples: Both of these are correct, but lots of people find the top one a little awkward. (When a clause specifies its noun, it is called a restrictive clause. When it's just additional information, it's called a non-restrictive clause.)
So, 'which' can head a restrictive adjective clause (without commas) or a non-restrictive one (with commas), but, if you're writing to just Americans, use 'that' for the former.

(These are both restrictive adjective clauses.)

(This is a non-restrictive adjective clause.)

You can't use 'that' to head a non-restrictive adjective clause. So, if the question had been 'Do you put a comma before that?' It would have been a much quicker answer. No.

(This translation is fine, but be aware that, for many people (especially Americans), 'that' scans better than 'which' without a comma.)

Let's get back to the main point. Remember that if an adjective clause specifies, there are no commas. If it doesn't, there are. Sometimes, you have to think really clearly about this:

The sentence above would also be fine with all the commas removed or with one inserted before 'which.' Whether to use a comma or not before a word like 'which' is not an aesthetics thing or a give-your-reader-a-chance-to-breath thing. It's not a fly-by-the-seat-of-your pants thing. It's an it-depends-on-the-precise-intended-meaning thing.)

(Question 2) Can you use 'whose' for inanimate things?

Here's the rule: Use 'who' when it's the subject of verb, otherwise use 'whom.'

This subject is covered more in the entry for the objective case.

That, like 'whose,' can be used for people or things.

Try to use 'who' instead of 'that' with people (especially in formal writing) because a fair proportion of your readers might find that with people a little uncouth.

(This is far more acceptable…well, grammatically at least.)

(Question 5) What's the difference between 'whose' and 'who's'?

(Question 6) Should you avoid ending a sentence in a preposition? 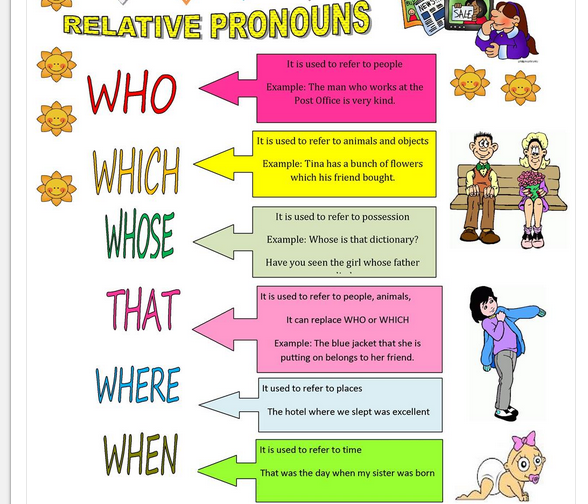 Here's the quick answer: No. Here's the longer answer:
When 'whom' or 'which' is the object of a preposition, you can start the adjective clause with the preposition.

Here are three randomly selected questions from a larger exercise, which can be edited, printed to create an exercise worksheet, or sent via email to friends or students.
Help Us To Improve Grammar Monster
Please tell us using this form.

The boywho is sitting is the manager

The noun the boy dimodifikasi oleh the relative clause “who is sitting.”

Menjelaskan sesuatu (menjelaskan klausa),
Contoh:
The boy who is talking there is a candidate of the winner in this competition.

The police caught the person who killed many people.

He reads the book which entitle “Red Rose”.
She visited the park which you told me.

She were successful which is proud.

The girl whom you told me about got the best score in biology.

The hotel where I take a nap is good.

There are times when you feel so enthusiasm.

This is why I really love her.