Breakfast in one hand and remote in the other, I was trying to find a good channel on a warm Sunday morning. Naah!! Not another Saas Bahu serial...no no..no sports channel for me...and then I came across a very flickering and unclear channel..Well no points for guessing..yes it was Doordarshan . They were broadcasting a short interview of Nirja Guleri .
'Nirja Guleri...Guleri ..I have heard about him . Does he come in my bank...well no ..ohhh Nirja Guleri !!!!!!'
Flasback:
Don't remember perfectly but I think I was in the third or fifth std and I remember our only lifeline was Doordarshan and DD Metro.I would wait desperately for sundays to come.
At sharp 9 am the sweet music would float in my Hall.
Chandrakanta ki kahani
ye mana hai purani..
ye purani hokar bhi
badi lagti hain suhani
naugaaaaaaaad vijaaaygaaaad ka raaaj kumaaaar..chandrakanta se karta thaaa pyaaaar..(2)
BLAH BLAH BLAH...
Wow!!! I loved Sundays soooo much. Every sunday would be like a picnic. We had a TV serial time table .
9 am : Chandrakanta
10 am : Duck Tales
11 am : Talespin
12 pm : Fun Time...etc etc
All my friends and I would assemble at one place to watch yet another romanchak episode of
' Chandrakanta'. The world that was depicted in that serial was just so fascinating .I was greatful to Nirja Guleri for making this serial ( Director or Producer of that serial ..I mean I am not sure..but who cares ) .
For those who have no idea what I am talking about...well I speaka Englis and' if ya still don understan lemme tell ya : 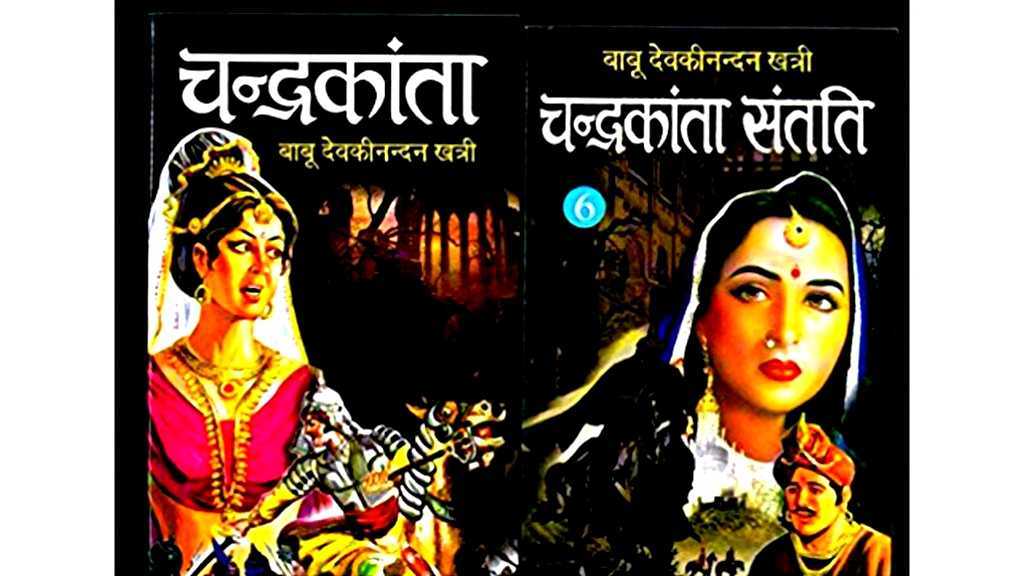 This serial was about Princess Chandrakanta of Vijaygad and Prince VirendraSingh
of Naugad . Both are in luuvvv. But there is our dushman zamaana. Both these kingdoms are big rivals of each other ( Due to some unknown reason ..now you don't expect me to remember these details do you ?? ). Now Chandrakanta has a very cruel minded minister ..Mr Krur singh . He wishes to marry her but then his wish remains merely a wish ..Why??...'coz Chandrakanta loves VirendraSingh ..stupid..(I see not' attentive in class..!!!)...So our Krur singh decides to go to the neighboring kingdom and join hands with another rival Mr Shivdutt. Shivdutt is another very interesting character in this serial . He, my good friends is not a normal human being or should I say he is not a homosapien...but an aiyyar..( A person who can convert into other animals..hmmm very dangerous ) and he has poison in his blood !!!!! Can you believe that ?? But childhood is such a sweet stage in one's life. You just don't have the brains as to what is good for you and what is ..well stupid...!!
We would all go numb each time Shivdutt would throw his new wife out of the castle window and make a snake bite him ( He has poison in his body toh due to some unknown reason he has to do that every day and is helped by his Ex -Flame Vishkanya in that ).Everytime this would happen it would arouse innocent questions in innocent minds..(who had nothing to do ...I don't understand why I would waste my energy in understanding these logics instead of breaking my head in understanding logics of maths or science..)
First Bacha :Hey why does he do that ??
Second Bacha: Tha bitch asked him to do that !!!
Darpok Bacha :Ohh !!! this Vishkanya ..God is watching everything..she will never have peace in her life.
Hmm innocent minds...but not all were innocent ..
Any romantic scene would eco giggles in the room..tee hee ..I didnt watch that.. what happened..??
Hey I have my eyes closed..how do you expect me to watch ??..but nothing much happened. He was about to tee heee.. kiss her...but ... but then he only hugged her.
Even Krur singh had become quite famous..he had become a role model for all small rowdy boys ..a beautiful girl in the street and suddenly you would hear ' Yakoooooooo '..or ' YAkooooo Pitaaajiiiii '...This dialogue of Yakoo Singh had become more popular than our great shakti kapoors ' Maaammaa AAAAOOOOOO'
And now for those who have started to complain that this post seems to be a mini episode of Chandrakanta..'EXCUSE ME..BUT HAVE YOU READ THE TOPIC...IT SAYS..'Chandrakanta : The Swashbuckling Fare '...that means ..it won't have anything related to your favourite serial 'Shaktimaan ' or may be ' Raja and Rancho'..(but must confess the monkey is quite brilliant in that...though I don't remember whether he was Raja or Rancho ..:p)
Ok back to the topic...no don't get scared I am ending my post in Chandrakanta Eeeestyle...
tatatatamnnnnn....' NIRJA GULERI PRODUCTION '
Again the music :Chandrakanta ki kahani...mana hai purani..lalallalalallaal..
THE END

© Provided by The Print[dropcap]I[/dropcap]n a 2018 interview with comedian Abish Mathew, late actor Irrfan Khan (as he was then; he later dropped the surname) recounted a story from the early days of his career. While working on the 1994 Doordarshan show Chandrakanta, the Slumdog Millionaire and Piku actor was asked if 'he thought he was Dharmendra' — all because he dared to ask about the future of his role of Badrinath, who often had only four or five lines in an episode. But even in those few lines, Irrfan managed to make his role so popular that not only did the character get more screen time, but it was even resurrected after being killed off. https://youtu.be/3d7NjfTziNM It was celebrated television actor Shahbaz Khan who had persuaded Irrfan to consider a role in the popular show. 'We were shooting for The Great Maratha (a 1994 DD show directed by Sanjay Khan) in Jaipur, in which Irrfan played Najib ad-Dawlah and I played Mahadji Scindia and we became friends,' he tells ThePrint. 'I convinced Irrfan to join Chandrakanta, which was extremely popular back then so that he'd gain more recognition.' Also read:Irrfan’s 8 finest performances and what made them so special

The show is a supernatural fantasy period drama based on an eponymous novel written by Devki Nandan Khatri in 1888, which is considered the first modern Hindi novel. Producer and writer Nirja Guleri adapted the story into its massively successful weekly television show avatar. The show focuses on the story of Prince Virendra Singh of Naugarh (Shahbaz Khan) and Princess Chandrakanta of Vijaygarh (Shikha Swaroop). A courtier named Kroor Singh (Akhilendra Mishra) in Vijaygarh dreams of marrying Chandrakanta and claiming the throne. Upon failing once, he befriends Shivdutt (Pankaj Dheer), the emperor of the neighbouring kingdom of Chunagarh, and plans a coup. Kroor Singh and Shivdutt eventually capture Chandrakanta who is saved by Prince Virendra Singh. A complex story with innumerable characters, it is full of mystique, sorcerers, spies and grandiose battles. 'The story of Chandrakanta is extremely gripping, it's one of those books you just can't put down,' Khan says, adding that while many renditions of the book have been created, (Chandrakanta Ki Kahani in 2011, Prem Ya Paheli - Chandrakanta in 2017) none have been able to recreate the magic of the book like Nirja Guleri was able to. 'Playing the role of Virendra added a new dimension to my life as an actor,' says Shahbaz Khan, who gained popularity as a heartthrob thanks to his role as the prince on a white horse. 'I think I have ridden a horse on the entire stretch of Film City while shooting the show,' he jokes. The title song of the show was particularly popular and had become a clarion call for many families in the early '90s to pause everything for a while and gather around their television set to watch Chandrakanta. 'All these years later, I still remember the song word for word,' says Tuhinanshu Chaturvedi, a radio jockey in Bengaluru, who proceeds to sing the song. https://youtu.be/N84tZnlX9is Also read: Nukkad, Saeed Mirza’s DD classic that used humour and a gentle gaze to portray the poor

The popular show was embroiled in various controversies, most famously, the way it was abruptly pulled off air by Doordarshan in 1996 and replaced with Shri Krishna for reasons that 'do not stand scrutiny', and was reinstated only in 1999 after a Supreme Court ruling. The show's comeback was a massive success, and it booked record television ads per episode at 25 minutes and 15 seconds. Even before this, Chandrakanta held the record of booking the most number of ads per episode, at 27 minutes and 25 seconds. The show was later run again on Sony TV and Star Plus. In the early 2000s, a 'Chandrakanta festival' at the fort of Chunar in UP was planned in a bid to boost tourism, but it drew sharp criticism especially from Kamlapati Khatri, grandson of the Devki Nandan Khatri, because he felt that Guleri didn't do justice to his grandfather's novel. Also read: Manthan ad from the 90s, with which Amul joins TV nostalgia trip after Ramayan, Mahabharat

After Irrfan's death on 29 April, many took to Twitter demanding a re-run of the show, which was, for many, their first introduction to the actor with the intense eyes and boundless talent. Irrfan played the role of Badrinath, the chief aiyar of Chunagarh. Aiyars were the king's spies and warriors. Great at impersonations, they could also shape-shift into animals, birds, snakes and insects. He later played Badrinath's evil twin Somnath who defected from the kingdom to join hands with the enemy. The biggest difference between the twin brothers lay in their hair (Badrinath had black hair while Somnath returned dawning reddish shoulder length hair). With loud eye make-up, lipstick and a jazzy costume, Irrfan could be seen leading battles, strategising what lay ahead, flaunting sorcery, conjuring fires. Even though the roles stand in complete contrast to some of the everyday relatable characters that he portrayed and is remembered for, Irrfan managed to weave magic as always. Also read: Malgudi Days to Karamchand – the Doordarshan classics that deserve a lockdown comeback