'Bang!' is a song recorded by South Korean girl group After School.[1] The single marked the first appearance of the group's eighth member, Lizzy.[1]It was later released in Japanese for the group's Japan debut. The single was released on 17 August 2011 in 3 editions. This version doesn't include ex-member Bekah, who left the group after the end of promotions for the group's first Korean album 'Virgin' to become a designer.

'Bang!' is After School's third Korean single. The title track, which was used as the lead single, was originally planned to be included in After School's second single 'Because of You', but was delayed due to the lyricist and composer wanting to make the track more complete. The single's concept displayed the group wearing sexy marching band outfits, and it was later revealed that Kahi was the mastermind behind the concept. Kahi stated after watching the American film Drumline, she fell in love with the marching band style and wanted to do a marching band concept ever since she took to the stage as an After School member. The group practiced playing the drums for five months with a trainer for the concept. It was the first release to feature third generation After School member Lizzy.

More than one year later, the single was released as their official Japanese debut under the stage name After School. The single was released in three versions, two CD+DVD editions and one CD Only edition. Both CD+DVD editions include the same track list, however A edition features contents in Japanese, while B edition does it in Korean. CD only edition also includes the original Korean version of the song, plus two instrumental tracks.

After School was accused of choreographic plagiarism after German dancer and choreographer Camillo Lauricella received messages saying that the group '...stole some of our moves for their music video of their song 'Bang!'. Lauricella further stated 'On the one hand its cool & flattering. But on the other hand... What do you guys think?' Lauricella and his good friend Nika Kljun originally created the choreography to Black McGrath's song 'The Night' and uploaded it on YouTube in February 2010.

Pledis Entertainment responded to the allegations stating 'There is a problem in deeming choreography as plagiarized just because a single dance move less than 3 seconds long is somewhat similar to another. The choreography for 'Bang!' is strictly the end product of our creation, put together by Pledis' Korean and American choreographers.' They went on to further say 'Dance is a language spoken through the body for everyone, regardless of cultural barriers. To give a comparison, one would not say that a certain modern choreography is plagiarized because it is similar to a Korean culture dance. We hope no more disputes and controversies are generated over this matter.'

The Korean version of 'Bang!' used in the CD only edition of the Japanese single is the '2011 New Recordings' version from the group's first album Virgin.

The single was released early in South Korea after Pledis Entertainment announced that preorder sales for the single had reached over 30,000 on online and offline retailers. Following the release of the single, 'Bang!' remained in the top 5 on various online music charts and continued to steadily rise. The single debuted at #4 on the Gaon Singles Chart before peaking at #2 the following week. The physical single debuted and peaked at #2 on the Gaon Album Chart, behind Girls' Generation.

The Japanese version debuted at #6 on Oricon's Daily Singles Chart and #7 on the weekly chart selling 23,760 copies. To date, the single has sold over 42,363 copies in Japan.

Retrieved from 'https://en.wikipedia.org/w/index.php?title=Bang!_(After_School_song)&oldid=989697782'
After School (アフタースクール) - Rambling Girls / Because of You

After two cover singles, it's time for Korean girl group After School to perform Rambling Girls, their first Japanese-language song produced exclusively for the Japanese market. In addition to the cool, up-tempo tune, the double A-side single also features the Japanese cover of the girls' Korean chart-topping hit Because of You.
Release Date : 25-01-2012 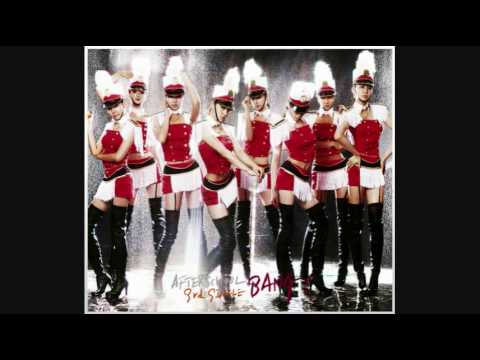 Source post: [Single] After School - Rambling Girls - Because Of You (Japanese Version)
from http://l.kstar-mp3.us/1I7YGUF